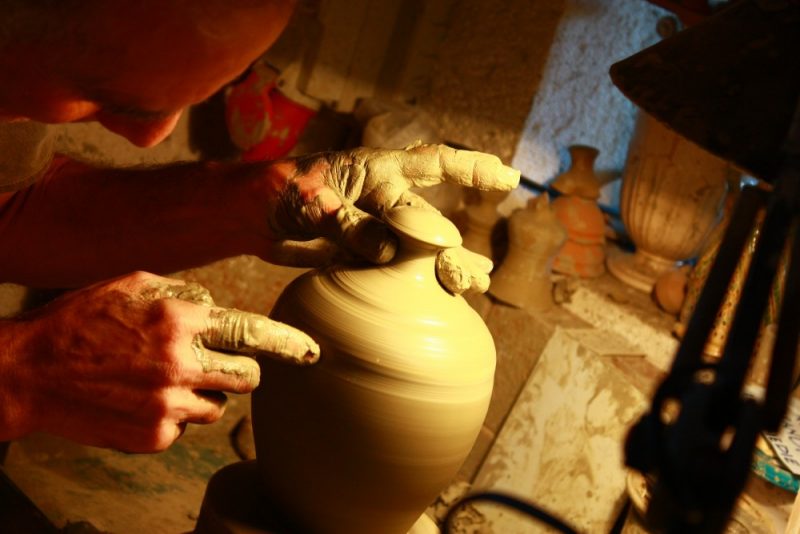 Grottaglie is a city in the province of Taranto and was built on a whole rock of limestone. The countryside that surrounds the city is full of deep ravines that open the ground into the heart of the limestone-rock which has formed breathtaking caves. For this reason the city was named Grottaglie, from the Latin ‘Kriptalys’, which means several caves.

Still today, if you take a tour of the caves you can still see what remains of the original homes including: stairs, paths and canal systems used to drain rainwater. Despite becoming a Modern and dynamic city in recent years, Grottaglie still retains the historical charm of its past, thanks to a number of buildings dating from the 15th century that adorn the old town including the Bishop’s Castle built in the 15th century by order of the archbishop of Taranto, which had also ordered the construction of the fortification walls. Essential elements of the castle are a large central square and its square tower. It was later enlarged and remodeled, with a facade of the Baroque period. The castle is now owned by the city council and hosts the “Museum of Ceramic” which exhibits ceramics dating back to the 8th century BC till today.

Of considerable historical and architectural importance is also the Mother Church which was built in the 13th century by order of Bishop too. Inside is the chapel of the Rosary with Baroque altars dedicated to two saints of the city: St. Cyrus and St. Francis.

Grottaglie has become famous over the years for its production of grapes which is used for the production of fine wines, and also in particular to the activity of handmade pottery. The manufacture of pottery within the region dates back to medieval times, but it’s only at the end of 18th century that the School of Art in Grottaglie was created. Still open and in business today, it operates in the old district located in the old town.

The manufacturing of ceramics is still of strategic importance both in economic but also cultural terms. The school houses its own souvenir shop which is open daily, and for a small fee you can see the masters as they work the clay making everything from: Plates, mugs, bowls, cups, as well as decorative designs on tiles. Grottaglie is also included in the list of the 28 Italian ceramic cities by “AICC” “Italian Association Pottery Town”.