Peschici is a small village in the province of Foggia, its territory is part of the Gargano National Park. It is a popular seaside resort with a marina and is one of the finest tourist destinations in Puglia. It has, very often, been awarded with the blue flag, by Foundation for Environmental Education, for the beauty of its coasts. The village is perched on a rocky promontory above the sea and the ancient area still retains original features of the medieval village.

At the top of the rocky promontory there is the medieval castle and all around the village there are several remains of the ancient fortification walls and towers. Very characteristic are its small houses, white washed and covered with domed roofs which allow the village to preserve its oriental style. It has the typical structure of the small ancient medieval villages with a narrow undulating streets, little steps and steep alleys, chimney-tops and little balconies, outside steps, vaults and arches  Nowadays lots of its small houses in the old town are being renovated and turned into souvenirs shops or charming hotels. 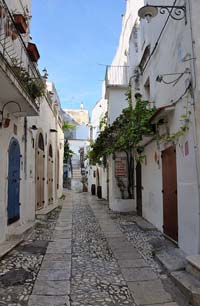 Main monuments in Peschici are: the Parish Church (which houses paintings of Pacecco De Rosa, an Italian Baroque Era Painter), the Santa Maria di Calena Church and several defensive towers scattered along the coast, among these the Monte Pucci tower which offers a great view of the harbor.

The coastline is characterized by the presence of several caves, of particular interest are St. Nicholas and Manacore caves. Underwater fishing is also widely practiced in its deep blue sea.

With its wonderful panoramic location overlooking the sea, Peschici is among the most enchanting and visited villages in the Gargano area. In recent years it has developed many touristic facilities and definitely become one of the main tourist destination in Puglia.