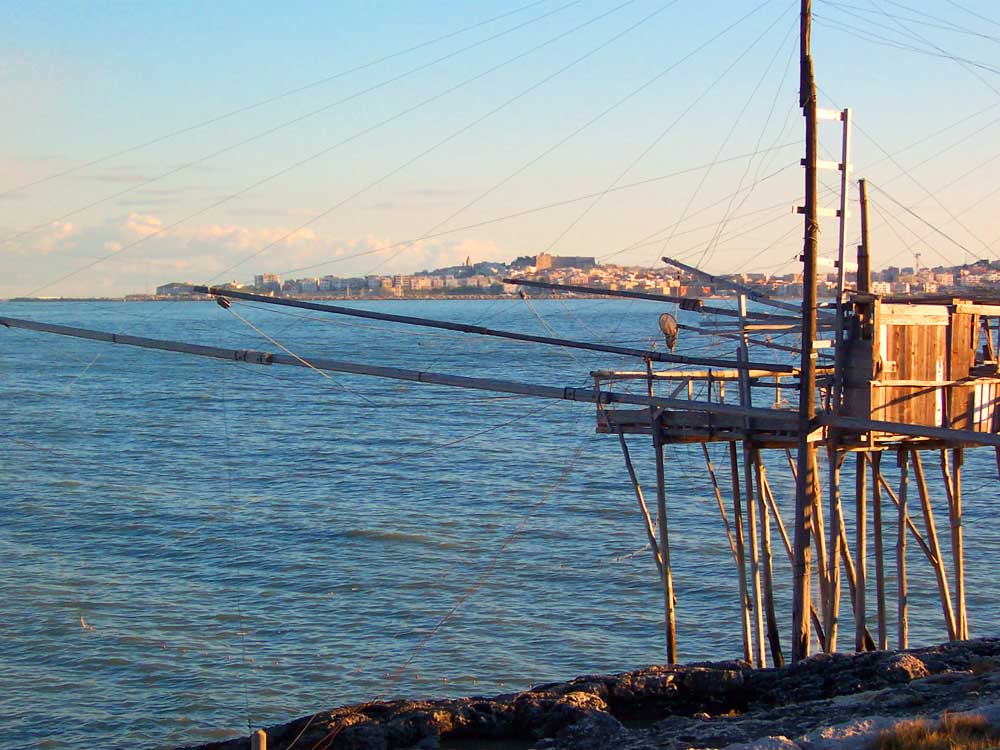 This colorful description perfectly describes the trabucco, a funny wooden structure which will definitely attracts your attention when you visit the Gargano Promontory as it is typical of its coastline, especially between Vieste and Peschici. The origins of the trabucco are still a little bit uncertain: most of the historians agree that this machine and the related fishing technique were invented by the Phoenicians and it made its first appearance in Puglia during the 18th century. Pretty soon the trabucco became a popular way of catching fish as it was not subject to unpredictable weather conditions and because fishing from a construction which was well anchored to the coast was safer than sailing the sea with small boats.

How it is made and works

The trabucco is basically a small pier with a complex architectural structure: a platform bonded to the rocky coastline with big pine logs, and a few poles (antenna-like) all tied by wires and pulleys, that horizontally stretch out over the sea and hold the big fishing net (the Trabucco itself which name the whole construction). Hence the name giant spider. It usually took four men (called trabuccolanti) to maneuver the trabucco and the fishing technique used is called “on sight”: two men operate the winch, a man is in charge of lowering and pulling the net and another one would monitor the flow of fishes and guide the rest of the crew.

Although the trabucchi are no longer actively used to support the fishing activity in Puglia, they are of huge value and cultural and historical interest and today they are protected by the Gargano National Park: special attention is dedicated to these old fishing machines which have contributed to the centennial fishing economy and are considered to be historical monuments.
Definitely a special attraction for all tourists visiting this area and not to be missed; a few of them have also been turned into small restaurants.

Pictures are a courtesy of Esperienze sul Gargano

A little altar for St Joseph