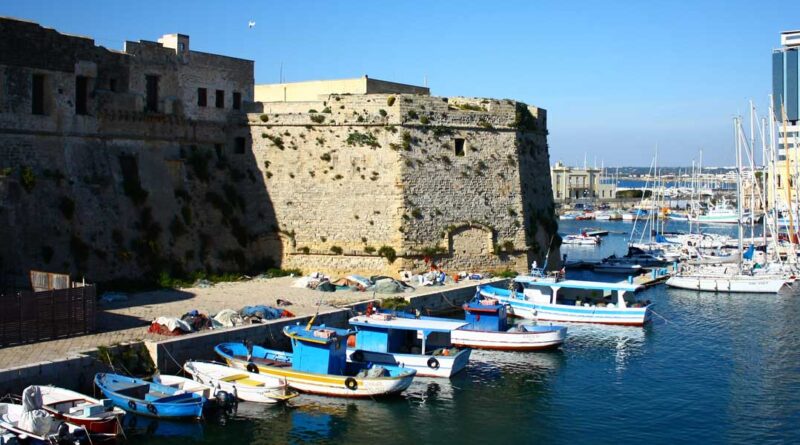 Gallipoli in Puglia (Italy), the pearl of Salento, is well renowned for its impressive beaches and for the charming of its small-fortified historical city center. Its name derives from the original Greek name ‘Kalé polis’ meaning ‘beautiful city’.

It is located in the west coast of Puglia, washed by the beautiful Ionian Sea and is one of the most visited places in region. The city is divided into two parts, the oldest and more historic and the other more modern, both separated by a 17th century bridge.

How to get to Gallipoli

By car: if you are coming from the North, you can take the A14 or A16 motorway towards Bari, follow the Bari-Lecce signs and then continue towards Gallipoli. If you coming from South, take the SS7 towards Brindisi and follow towards Lecce.

By train: you can get to Lecce and from there take a regional train to Gallipoli. The journey from Lecce to Gallipoli takes an hour and a half.

By plan: the closest airport to Gallipoli is the International Airport of Salento, located in Brindisi. Here you can take a shuttle service that leaves directly from the airport towards Lecce and then get to Gallipoli with bus line 108. Alternatively, you can rent a car

Things to See in Gallipoli

The most essential thing to see in Gallipoli is its historic center. Tour it; lose yourself in its streets, its souvenir shops, its local gastronomy businesses, its craft workshops with products from the area.

The center is fortified and surrounded by ancient walls; you can access it by crossing the ancient bridge.

One of the most iconic places to see in Gallipoli is its Aragonese castle, which was built in the middle of the Byzantine era. The structure has undergone several modifications over the years.

Today the castle has a square base with a tower at each angle, as well as a fifth circular tower, which is known as the Torre del Rivellino. If you like castles, you can visit the prisons and rooms and discover the transformation and uses of the fortress.

The cost of admission is €7, €4 for a reduced ticket for children between 6 and 14 years of age and for those over 65 years of age. Children under 6 years of age have free access.

Our second stop is the Greco-Roman fountain, which according to some historians is the oldest fountain in Italy. Originally it was thought to date back to III century BC, later and after several studies, it has been determined that the creation of the fountain was later, specifically from the Renaissance period.

It is located at the beginning of the bridge that gives access to the old part of the city and has two different facades.

The cathedral is the most important religious building in the city. It was built between 1629 and 1696 and is made in Leccese baroque style.

Admission to it is free and it is open at any time.

The Chiesa della Purità was built in the mid-1600s. Although it has one of the simplest facades, the interior is completely the opposite, as it is richly decorated with frescoes in every corner of it.

The church is managed by a fellowship made up of volunteers who open the doors of the temple “when they can”. That is why there are no set hours for visits.

We reveal you a secret: the canvas located in front of the altar can be lifted using a pneumatic mechanism. In fact, the canvas hides the frescoes of the evangelists Matthew, Mark, Luke and John

Sanctuary of the Madonna del Canneto

It is very close to the Greco-Roman fountain and next to the port and dates back to the middle of the year 1600. Inside, it is possible to appreciate the representation of the Madonna del Canneto; fishermen used to tell legends about her and her miraculous appearances.

The port is one of the places to see in Gallipoli. It is very beautiful, thanks to its waters, the boats and the Aragonese castle with the main background.

A must-visit for seafood lovers, we advise you to visit it when the fishermen return from their working day when you can see how the locals crowd to buy the best pieces.

Gallipoli was a truly rich city in the past, as it was one of the largest exporters of oil used to light the streets of European cities. There are still numerous mills, places where oil was extracted from olives.

Some of them are open to the public such as Frantoio di Palazzo Briganti (free entrance) and Frantoi di Palazzo Granafei. For more info visit the Associazione Gallipoli Nostra

Things to Do in Gallipoli

If you wish to book an activity in Gallipoli click here

Watch the sunset at Purità beach

In the old part of Gallipoli there is a small bay with clear waters where you can take a dip and enjoy a beautiful sunset. It´s called Seno della Purità beach.

In addition to its clean and transparent waters, you can enjoy the location given that it is surrounded by the city wall, embedded between towers and bastions with a spectacular background.

After your swimming, climb up the town walls and sit outdoors to eat a seafood dinner at one of the restaurants overlooking this harbor as night falls, certainly the perfect ending to an enjoyable day in Gallipoli.

This dish’s origins lie in its name – Gallipoli. The scapece dates back to medieval times when the town came under siege by various Mediterranean authorities. Inhabitants of Gallipoli took refuge behind the city walls and therefore needed to find ways to prolong the life of some foods.

Scapece involves layering small fish with vinegar, breadcrumbs and saffron, which is left to marinade.

Relax in the paradise of Baia Verde

Have an aperitif of raw fish

We already know that the gastronomy in Puglia is exceptional and we recommend that you do not leave Puglia without trying some of the typical dishes.

However, if you are a lover of fish and shellfish, you are in one of the best cities in Puglia with the highest quality and quantity of both.

Gallipoli is the perfect place to try raw fish: mussels, squid, red and purple prawns, sea urchins, oysters. You have a wide choice and remember that it must be all raw.

When you enter the historic center of the city, through the bridge, you will see several small stalls on your right, with the appearance of a fish market. This place is actually a market-restaurant area with very fresh seafood, all freshly brought from the high seas!

Walk along the city walls

Simply touring the walls is one of the best plans you can have in Gallipoli. Admiring the life of the locals, enjoying a brutal landscape and getting to know another important part of the city. Stop at various bars and restaurants and try exquisite dishes while enjoying the surroundings

Have fun in Gallipoli

Fun is always guaranteed in Gallipoli, the day can be enjoyed on the beach, along with activities such as spas, natural reserves and water sports.

At night the city offers also an amazing nightlife. Many discos and nightclubs are within the city or just outside. The evening usually starts as early as in the late afternoon on the beach where you can enjoy the aperitivo and drink a cocktail on the beach listening to music.

Gallipoli is one of the most popular coastal destinations in all of Salento thanks to its splendid sea. It is not very difficult to find beautiful little beaches outside of Gallipoli, in fact, just outside of the city perimeter there are some nice and quiet ones.

The beaches of Gallipoli need no introduction, but we recommend a visit to the beaches of Baia Verde and Punta della Suina, two of the most beautiful beaches in Puglia.

Is Gallipoli in Turkey or Italy?

Gallipoli is a city in the Salento area, South of Puglia

What is Gallipoli Italy known for?

Gallipoli is famous for its port and its historical old town which sits on a small island connected to the new city with an ancient bridge. It´s also famous for the coastline and nightlife

Is Gallipoli Italy worth visiting?

Yes, absolutely. It is indeed one of the top places to visit in Puglia. Whether for a long stay or just the weekend is a must to visit