On 22nd February, a new comic noir arrived in all newsagents in Italy and has already been subject of discussion and reflection from the national public opinion.
Italians have surely heard of Lady Mafia and many you have might written and commented on it. But if you haven’t read it yet, you should try to get a copy and give it a look!
Like any form of artistic expression, this comic would either meet or not your sympathies, but the commitment and enthusiasm that the authors have put into the project is undeniable and deserves all our support.

Fruit of the vivid imagination of the Pugliese Pietro Favorito and animated by the drawings of Domenico Naglierio, Lady Mafia is set in Puglia and tells the story of Veronica De Donato, originally from Foggia and raised in the north, after having witnessed the destruction of her family by the hand of the Puglian Mafia, decides to go back home under a false name and fight Nostradaunia, the local mafia, to revenge her family.

As part of the narrative gender noir, Lady Mafia is pretty strong and sometimes it comes across as sexist, but the comic is definitely on the side of women, leading readers to reflect on the role of women today and their personal and social dramas.

Being a project created and set in Puglia, Lady Mafia also offers an Extras section in the appendix to the story, to promote the beauty of the area and local initiatives.
Among the collaborators there is also Beautiful Puglia and in this issue we will take in an on the road journey through the Gargano mountains!

Also in the Extras the theme of femininity and dramas of the “modern” woman return, deepened by psychologists and experts that talk through the voice of the characters.

Finally, Lady Mafia may tell a violent reality, but doesn’t invent it for complacency. It’s a comic book, take it as such and enjoy the reading!

What to do in Puglia 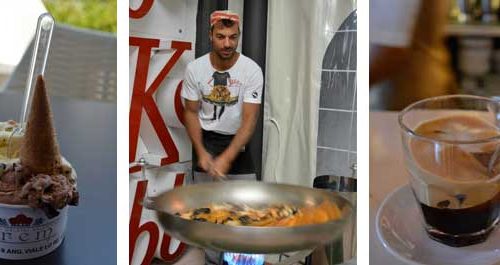 Mangia! Mangia! The Espressino Travel Guide to Eating in the Salento