Lecce may be called the Florence of the Baroque. In this artistic tendency in Italy there is nothing that can be compared. This is how that the historian Gregorovius described Lecce. Lecce is the capital of the Lecce province and of the Salento sub-region.

Located just 11 Km far from the Adriatic Sea and 23Km from the Ionian Sea, it lies in the middle of fertile plain, surrounded by attractive countryside, seashore and small towns. The city can easily be reached from Brindisi airport and it makes the perfect destination for a weekend break or a holiday as it’s a great base for exploring the Salento Peninsula.

Lecce is the Baroque masterpiece of Italy and stupefies tourists with its little-known magnificence, its noble palaces and undeniable beauty of its numerous churches. In 2010 the city has been listed in “Best in Travel 2010” by Lonely Planet. 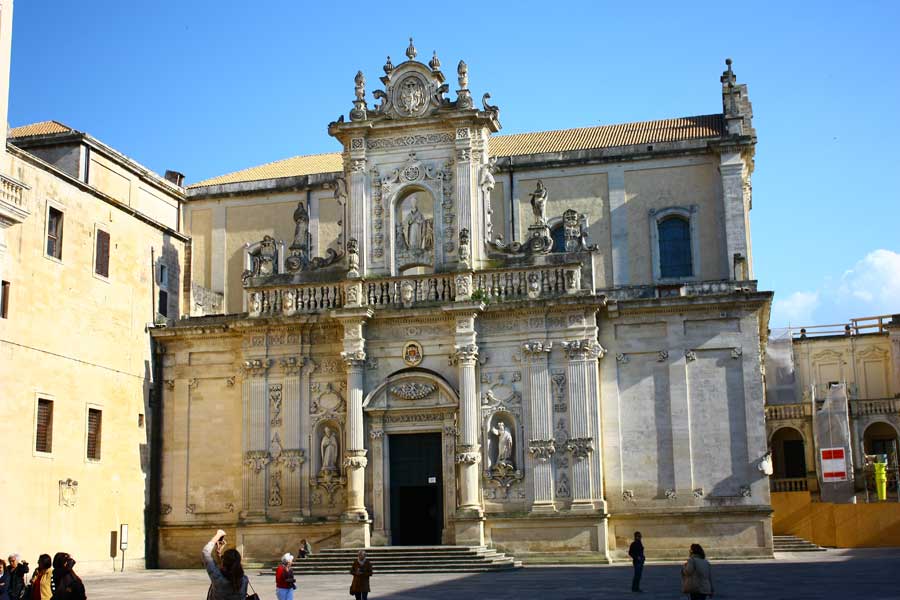 Lecce’s history goes back a long way, it was founded by Messapians and then conquered by Romans during the 3rd century BC, at that time it was named Lupiae. Over the centuries, the city has been  conquered by many civilizations – the Norman, the Byzantine, the Spanish and other dynasties had settled here and have left a lot of traces of their existence through art and architecture.

Its long and noble history is certainly witnessed by the numerous buildings and Churches scattered across its lovely historic centre. The town’s great artistic treasure is its architecture with picturesque little lanes and Baroque churches with facades finely decorated. The 17th century was definitely the period of prosperity which led to grand developments and the construction of palaces and churches. These buildings adapted the fashionable Baroque style to the soft local stone, with decorations and cherubs extravagantly covering facades and doorways. This local style is known as barocco Leccese (‘Lecce Baroque’).

Lecce is built of stone that glints gold and cream in the sunlight, it is taken from the surrounding land and it is called pietra leccese (literally stone from Lecce), a light yellow, soft, compact and easily workable limestone. More than the architects, it was the local craftsmen and masons who left their mark in this city, working the stone and letting their ideas run wild especially when designing the facades and creating marvellous compositions made up of animals, birds, monsters, cherubs, flowers and fruit.

We start our tour from St. Oronzo square (piazza Sant’Oronozo). This is the central square and big heart of the city, surrounded by shops and cafes it is constantly full of people; it is site of the most important Roman ruins: a 25,000-seat theatre and amphitheater from the 1st century BC, this is where many wild fights between gladiators and beasts had taken place. A big column stands atop the square and a statue of bishop and patron saint Oronzo is perched on top of it. It is one of the two columns which marked the end of ancient Appia road and originally stood in Brindisi. 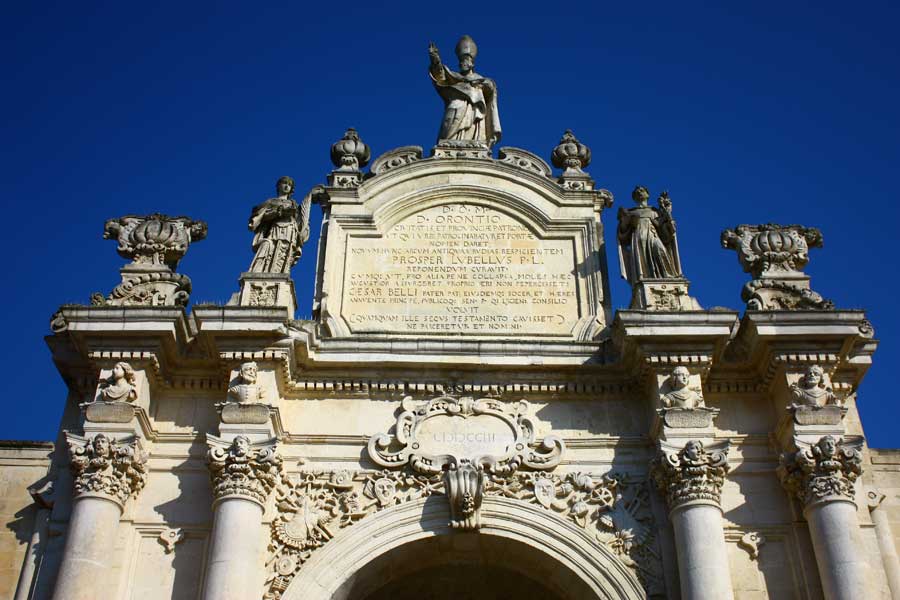 Piazza Duomo (Duomo Square), one of the most beautiful squares in Italy is definitely the best example of Baroque architecture: it is a big enclosed square with the Cathedral sitting on the left corner alongside the 50m high campanile (bell tower). The double-facade Cathedral was built in 1659 with a Latin cross shape and has 13 altars. The main facade is characterized by very simple architecture while the side facade has an exuberant baroque style. Completing the square is the Episcopio (Bishop’s Palace) which is the Bishop’s residence and is built just beside the Cathedral and the Seminario (Seminary). It is adorned with friezes and tall pillars and the courtyard has a beautiful well with two angelic guardians, it is decorated with garlands and also bunches of fruits and flowers.

One of the most fascinating expressions of baroque architecture is the Church of Santa Croce, (which lies north of St. Oronzo square) whose baroque façade is as exuberant as its large Renaissance interior is austere. It took a team of craftsmen over 100 years to complete the church but the result is astonishing. Entirely built which leccese stone the facade is a masterpiece of ancient architecture to marvel at, it is ornamented with strange beasts and allegories, cherubs, fantastical monsters, plants. The interior, in stark contrast to the facade, it is done in plain Renaissance style.

Other main sights in the city are: Church of St. Nicolò and Cataldo built in 1180, Church of St. Irene dedicated to one of the three patron saints (Oronzo, Domenico and Irene), Church of St. Chiara with a madly decorated altar. Porta Rudiae the ancient entrance to the city before leaving this honour to Porta Napoli also called Triumphal Arch, consisting of two slender Corinthian pairs of columns it is one of the most popular landmarks in town. The castle which was built around an ancient Norman fortification, it consists of two concentric trapezoidal structures surrounded by solid battlements and an impenetrable moat.

The Sigismondo Castromediano Province Museum is the oldest in Puglia and as it has been the only museum for years it has an impressive archaeological collection coming from any town in the region. This gives a deep insight to the different ages and civilization the region has gone through.

But Lecce is not only Churches, museums and Baroque buildings. Lecce’s old city centre is a big outdoor museum: there’s a grace and original elegance in its wonderful small streets, alleys and courtyards packed with upmarket boutiques, antique shops and furniture restorers. There will be always something capturing your glance: a delicate wrought-iron balustrade, a curving whitewashed arch or simply a soft amber street lamp.

Lecce is also famous for the craftspeople who construct various models out of cartapesta (papier màché), there are plenty of small studios in the old town where these artists can be admired while modelling a wire and covering it with paper dipped in glue. Finally the model is painted with oil paints.

Not to be missed is also the pietra leccese tradition with many studios in town where artists work and model the famous stone creating great sculptures.