Ostuni is a town in the province of Brindisi which has a population of about 32,000 people, but during the summer months this mushrooms to a massive 100,000 proving that Ostuni is a must see to any visit in Southern Italy.

Ostuni is also known as “White City” (Città bianca) because its historic center is entirely painted with white lime. It is a very popular tourist destination. 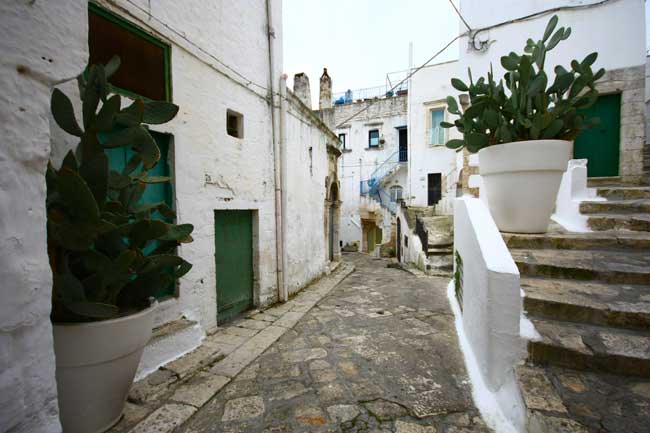 The origins of the city can be placed in the Paleolithic period (approx 50.000 – 40.000 years ago). The area was originally occupied by hunters who built their huts in the caves that characterize the territory of Ostuni.

Human presence in this area around that time was confirmed by the discovery of a skeleton belonging to woman later named as the “Woman of Ostuni”. The skeleton that was found in the cave of Agnano was of a woman who was pregnant at the time of death, her body was later dated to be about 25,000 years old.

Ostuni was occupied and inhabited by Messapi, Lombards and Romans but it was under the Spanish empire of Isabella of Aragon that the city reached its economic and cultural peak. It’s also in this period that the city witnessed an intense urban development; the Spaniards strengthened the fortifications walls of the city and built the towers of Pozzella and San Leonardo.

The towers were built in 1539 along all the shoreline, as protection against anticipated attacks from the Turks who controlled the Balkans. These towers (still existing, including Pozzella Tower, the Pylon, Villanova and others), were permanently garrisoned and communicated through fire beacons. 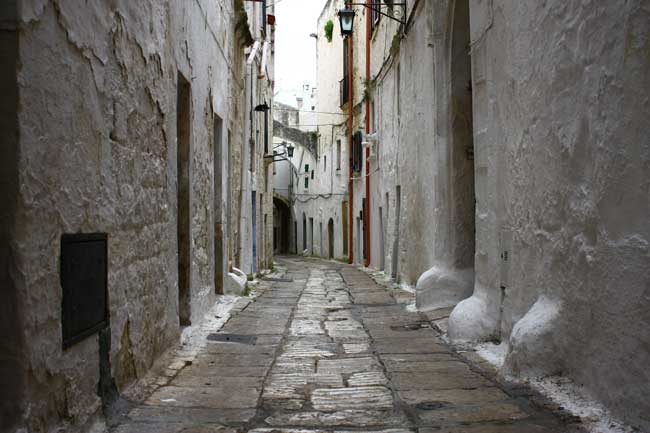 Today Ostuni is a city which bases its economy on agriculture and the processing and exporting of its products such as: olive oil, almonds and wine. Ostuni’s historical center is very distinctive; the roofs of the houses are painted with white lime.

Use of white lime originated in the Middle Ages as it was easy to find and gave more light to the small alleys that make up the historic center  In addition, the white lime was a way to prevent the spread of the plague in the seventeenth century, this is how Ostuni gained its nick name ‘White City’. 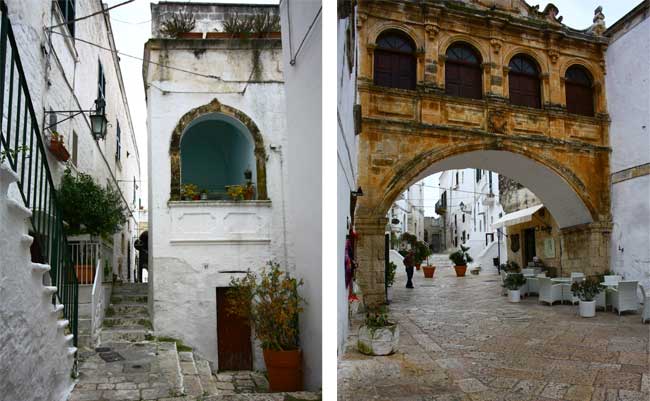 There are many examples of the ancient architecture, among them to highlight the walls, the Cathedral and the Column of Sant’Oronzo. The Cathedral is situated on a hilltop surrounded and protected by the houses of the old quarter; it can be reached by walking along the only road that connects the Cathedral to Sant’Oronzo Square, a narrow and winding road but very characteristic and full of little shops / boutiques.

Scenic walks can be taken around the city along roads that offer exceptional views from the surrounding countryside to the coastline.

In the area around Ostuni there are also several Masserie. A Masseria was a fortified farmhouse typical in Southern Italy and in particular in Puglia. They were owned by wealthy families and landowners.

The farmhouses were sometimes occupied by landowners, but the large constructions also included the homes of peasants and in some areas even pitches, stables, stores and forage crops. 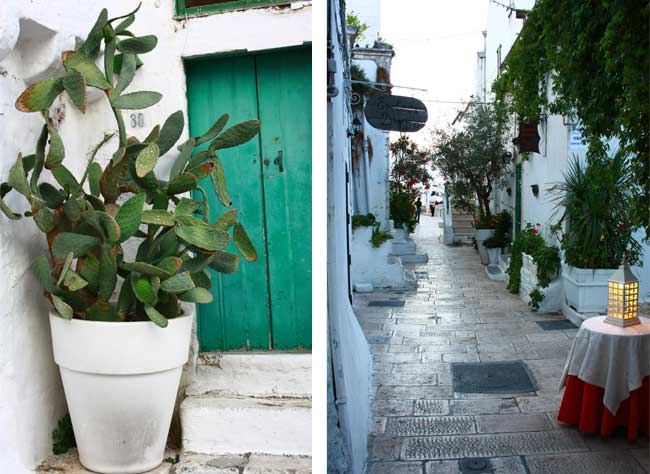