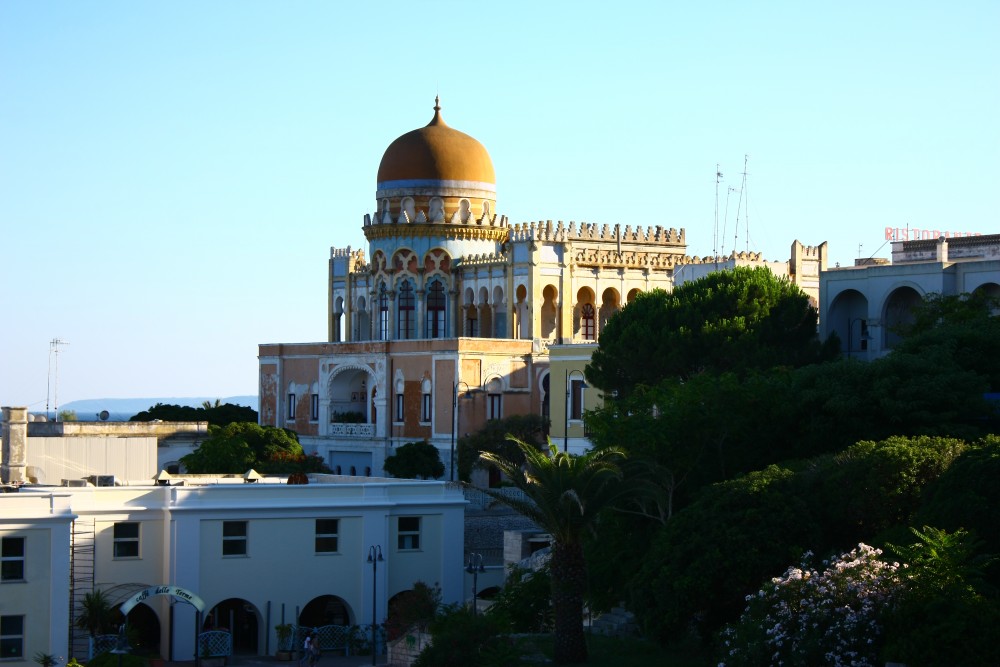 Lu Salentu: lu sule, lu mare, lu ientu (Salento: the sun, the sea, the wind) is definitely the best saying that people use, here in this land in their own dialect, to describe this land.

Salento, also known as the Salento peninsula is a sub-region that extends over the southern part of Puglia, and is washed by the wonderful Ionian and Adriatic Seas. The area includes the entire Lecce province, almost whole Brindisi province and part of the Taranto one.

Its territory includes more than 100 towns and villages, with the characteristic white houses, narrow and winding roads and where everyone has its own dialect, all surrounded by the green of secular olive tree grove, tobacco grove and vineyards.

Salento is a land of extraordinary natural and architectural beauties. It is best known for its beautiful, unspoiled beaches and its stunning baroque architecture but also for its nature (there are exactly 1390 different species of flower plants); history (Many remains of Greek and Roman domains and pre-historic monuments are scattered all over the area); its southern Italian ebullience and a heady mix of traditions and its party atmosphere. It is loved for its great weather, traditions, several wonders to discover, warm sun and blue sky, crystal sea and dreamlike coast.

To better describe this beautiful land we start from its extreme southern point Santa Maria di Leuca. The town of Leuca was believed by Julius Caesar to be the last town in the world; it is washed by the two wonderful seas, the Ionian and Adriatic Sea and is enriched by noble mansions and villas of various architectural styles.

Heading north along the Adriatic coast we can admire a long stretch of coast of extraordinary beauty and unspoiled nature, characterized by cliff which fall sheer into the sea and alternate with inlets and natural coves and grottoes.

In the beautiful town of Castro, in front of a deep blue sea, there are the most beautiful rocky grottoes, the Zinzulusa grottoes with the entrance facing the sea. This stretch of coast is famous for the clear deep blue sea and the possibility of deep-sea diving.
Near Castro is Santa Cesarea Terme, a town with a major spa complex since Roman times. The spa today, open for treatments, is a huge 19th-century Moroccan-style edifice right on the seafront, painted in jaunty shades of blue, raspberry-pink and moss-green.

The journey continues up the coast where we find the city of Otranto overlooking the sea. Otranto is the easternmost city in Italy; it was an important fortified town in Roman times and it still preserve an old city center of extraordinary historic beauty. Today it is one of the main tourist destinations on the Adriatic Sea and thousands of tourists descend every year to its beaches.

Up north there are lakes Alimini. These lakes are rich with various species of vegetation and plants and the whole area is surrounded by pine forest and Mediterranean scrub.

Further north there are the two lovely resorts Torre dell’Orso and San Foca with beautiful beaches and white cliffs. Last spot on the Adriatic coast is the territory of Vernole and the natural reserve of Le Cesine, an oasis protected by the WWF and rich in many species of flora and fauna.

Leaving the coast and moving towards the inner land we cross the small fortified village of Acaya whose origins date back to 1535 and we are finally in Lecce, the capital of Lecce Province and heart of Salento. It is a stunning city and is a must-see; capital of Baroque architecture it is called the Florence of the South. Full of noble buildings and churches built with local stone that is extracted in the surrounding area.

Moving from Lecce towards the Ionian coast we will cross vast stretches of olive tree groves with huge twisted trunks, which are among the most important symbols of Puglia, until we reach Galatina. This town is where the heritage of the old Greek domain is better kept. It is also home to the Basilica of Santa Caterina which has the interior totally fresco-ed and is considered the best artistic treasure in the whole Salento area.

The Ionian coast is flatter than the Adriatic coast and characterized by white sandy beaches and Mediterranean scrub. Main resorts and villages are Torre Lapillo and Porto Cesareo which has a protected marine area and is a remarkable touristic centre with 17 Km of beaches facing an archipelago of small islands.

Heading south we encounter other lovely places like the natural reserve of Porto Selvaggio, Santa Maria al Bagno, famous for its thermal baths and its roman harbor it is a pleasant bathing town with several dated buildings and Santa Caterina, here the coast shows an Arabic architectural style. Finally we arrive in Gallipoli, the pearl of the Ionian Sea with the old part of the town located on a small island and connected to the main land through an ancient bridge.

The journey continues through a beautiful landscape, made up of low cliffs followed by white sandy beaches and emerald green water. The journey ends to the starting point of Santa Maria di Leuca.

Salento has a great party atmosphere with every town and village having their own yearly festa, so in summer there’s a choice of several to attend every night. Most involve old religious rites and the traditional and famous tarantella and pizzica dancing.

Finally the Salento cuisine, simple and rich in typical local products, typical dishes include mainly fish and vegetables, accompanied by excellent local wines.
This and more to be discovered in the magical land of Salento.