Puglia, also known as the heel of the Italian boot: such a splendid region offers charming towns and villages, marvellous architecture, tasty food, plenty of traditions and folklore. Here we want to present you with what we consider to be the best place to visit in Puglia and among the most beautiful in Italy.

Otranto is a town in the province of Lecce and is part the Salento area. It is located in a harbour along the east coast on the Adriatic Sea and is the easternmost town in Italy. Its small seaport is mostly used for fishing activity and tourism, especially for the ferry services to Greece. The city also gave its name to the Strait of Otranto, which separates Italy from Albania. The old town of Otranto has been declared by UNESCO as “Heritage witness to a culture of peace”. More

Alberobello is a small yet characteristic town located South East of Puglia in the province of Bari, (in the middle of The Itria Valley). Built on top of two hills; the new town is located on the eastern hill and is characterized by a modern architecture. The western part is occupied by the old town (trulli) and the whole area is divided into two districts: Monti and Aia Piccola, both National Monuments. Alberobello is without question one of the most characteristic towns in Italy and is famous for its traditionally built ancient stone houses called trulli, (which since 1996 have been named a UNESCO World Heritage site). More

Castellana Caves (Castellana Grotte) is a small town in the province of Bari. The town bases its economy mainly on agriculture and tourism. It has a very nice historic centre with many ancient buildings dating back to the 17th century. The town links its name primarily to the enchanting beauty of its caves, the largest and most picturesque complex of caves in Italy and one of the main tourist destinations in Puglia. More

Castel del Monte is a castle located near Andria, it was built in the 13th century by order of the Frederick II (during the Swabian domain in Puglia) and it’s probably the most famous buildings that the Emperor ordered to build during his long empire. It has been a UNESCO World Heritage Site since 1996. More

Lecce may be called the Florence of the South. In this artistic tendency in Italy there is nothing that can compare. This is how that the historian Gregorovius described Lecce. Lecce is the capital of the Lecce province and of the Salento sub-region. Located just 11 Km far from the Adriatic Sea and 23Km from the Ionian Sea, it lies in the middle of fertile plain, surrounded by attractive countryside, seashore and small towns. The city can easily be reached from Brindisi airport and it makes the perfect destination for a weekend break or a holiday as it’s a great base for exploring the Salento Peninsula. More

Gallipoli is a wonderful town in the province of Lecce and is undoubtedly a must-see in the Salento area. Its name derives from the original Greek name ‘Kalé polis’ meaning ‘beautiful city’. Located along the Ionian coast, the town is divided into two parts: the new and also bigger part is of recent construction and is where the main public buildings and businesses are located. The old part of the town is on a small walled island connected to the mainland by a 6th century bridge. Aside of the bridge there is the Aragonese Castle, it was built in the 13th century and is one of the few castles washed by the sea. More

Gargano, also known as the spur of the Italian boot, is a promontory (it’s actually called the Gargano Promontory) that extends into the eastern part of Puglia and is surrounded by the Adriatic Sea. It is part of the province of Foggia and is almost entirely occupied by the Gargano National Park which was established in 1991. From a geological point of view the Gargano is a peninsula and is mostly mountainous (its the highest mountain in the region with a peak of over one thousands meters), it was once an island, and is still separated from the mainland by a vast flat tablelands called Tavoliere delle Puglie. More

Ostuni is a town in the province of Brindisi which has a population of about 32,000 people, but during the summer months this mushrooms to a massive 100,000 proving that Ostuni is a must see to any visit in Southern Italy. Ostuni is also known as “White City” (Città bianca) because its historic centre is entirely painted with white lime. It is a very popular tourist destination. More

San Giovanni Rotondo is a town in the province of Foggia and is also part of the Gargano National Park. Famous around the world as it houses the remains of St. Padre Pio of Pietrelcina, a Capuchin friar who lived in the town. The city was founded in 1095 on the remains of an ancient village, which dated back to the 6th century BC, and is located on the road to the Monte Sant’Angelo (this village was founded around the cave where the Archangel Michael had appeared). More

Tremiti Islands is an archipelago composed of five small islands and is located just 20 km from the Northern coast of Gargano. The five islands are: St. Nicholas (San Nicola), St. Domino, Capraia, Cretaccio and the farthest out, Pianosa; from an administrative point of view they belong to the Foggia Province and are also part of the Gargano National Park. More 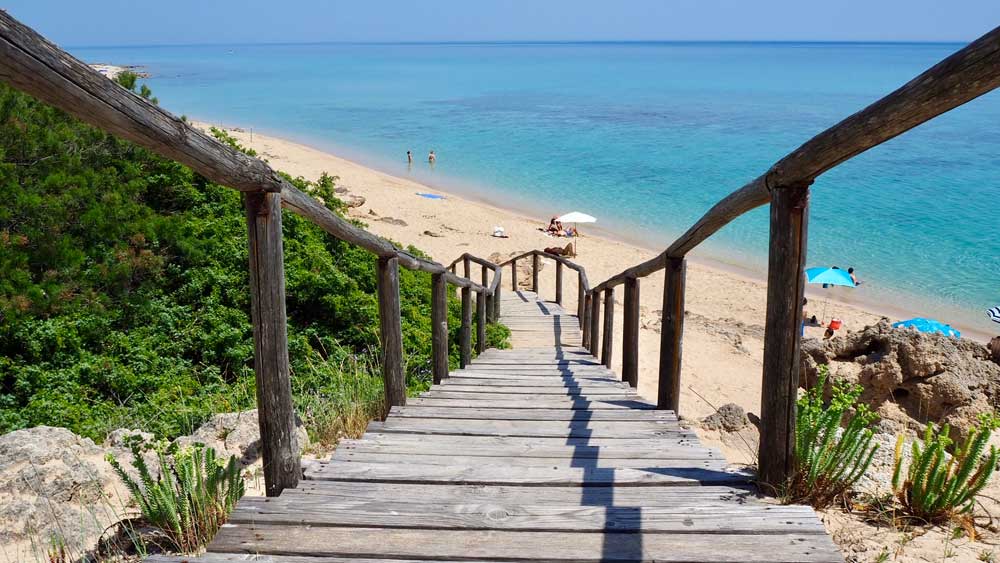